Steph has the world at her feet

When Stephanie Tweed steps out this weekend to represent her country in the Homeless World Cup, it will mark an incredible step on her journey to recovery from drug addiction.

Steph, 21, from Edinburgh, used heroin and valium from an early age and ended up losing her home.

After finding herself on the streets, she was eventually placed in Dunedin Canmore’s homeless hostel in Leith. As part of the support offered while in the hostel she was encouraged to take up football sessions.

The sessions encourage personal development through football and are run in partnership between Dunedin Canmore, part of Wheatley Group, and Street Soccer Scotland.

The support she received from team mates and coaches helped her confidence, self-belief and focus grow. Her life is now back on track and she is looking forward to moving into a home of her own.

And Steph will now take centre stage as a striker for the Scotland Women’s Team at The Homeless World Cup taking place in Glasgow’s George Square from 10-16 July.

She said: "I’ve loved football since I was a kid. It was the one place I could leave my problems behind."

"When I was told I had a chance of making the Homeless World Cup team if I kept my head down and stayed off drugs it really kept me focused and I’ve been clean now for over six months."

Steph now lives in a Dunedin Canmore supported tenancy in Gorgie, Edinburgh. The tenancy is part of their Resettlement Scheme which helps homeless people learn about managing a home; if it’s successful they are offered a permanent tenancy with Dunedin Canmore.

Steph said: “The hostel was great, helped me get back on my feet and I love living in my flat and having my freedom."

"I wouldn’t be here without the help of the people at Dunedin Harbour. I’m rebuilding relationships with my mum and two younger brothers, something I couldn’t have imagined a couple of years ago."

"They are so proud of me for sticking to my commitment with the Homeless World Cup and can’t wait to cheer me on. I’m nervous but excited about getting on to the pitch and enjoying this once-in-a-lifetime experience.

"I won’t let any of the opportunities coming my way pass me by."

After the Homeless World Cup, Steph wants to give something back and plans to volunteer at Street Soccer Scotland - coaching at the football sessions that she got so much out of. 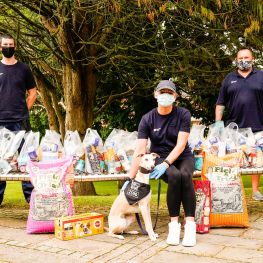 Wheatley Group has delivered more than 25,000 emergency food parcels to people at crisis point as a result of the pandemic. Cash help if your child starts school in August

IF you’re on certain benefits and your child is starting school in August you can get cash help from the Scottish Government.

Here for you in difficult times

Please know we will do all we can to support you and your family through these extraordinary times.