Children from Tollcross primary school in Edinburgh are filling a time capsule with mementoes to mark a major restoration project at a pre-1919 tenement.

And the P5 pupils hope their collection of items, which will be placed behind a cornerstone of the building at Earl Grey Street, will lie undiscovered for 100 years.

The tenement is being restored by Dunedin Canmore, part of Wheatley Group, and is just up the road from the primary school.

Councillor Cammy Day, Education Convener for the City of Edinburgh Council, visited the class at Tollcross primary school to see the items they have prepared for the time capsule. He said: "It's difficult to imagine what Tollcross will look like in 100 years’ time but I bet the pupils of the future can't wait to get their hands on all the interesting items that our generation have put into the time capsule today. It will be a real eye opener for them as to what life was like in 21st Century Edinburgh when it’s discovered."

The finished time capsule will contain a variety of items including letters and pictures from the pupils along with local and national newspapers, photos of the class and staff who have worked on the building and newsletters from Dunedin Canmore.

Tollcross primary head teacher, Alice Brown, said: “Working with Dunedin Canmore on the time capsule project has been a very rich and creative learning experience for our P5 class and their teacher Miss Anderson.

“The children really enjoyed sharing their thoughts about what the world might look like in the future. They worked collaboratively to capture their ideas and very much enjoyed sharing them with the visitors from Dunedin Canmore and the City of Edinburgh Council.

“It was very exciting for them to see the time capsule and put their artwork inside. Hopefully some of them might still be part of our Tollcross community when the box is opened in the future!”

Dunedin Canmore Managing Director Hazel Young said: “We’re really pleased to have children from the local community contribute to the time capsule. It’s a wonderful opportunity to involve them in a special experience that will hopefully delight future generations.”

The Earl Grey Street restoration project is one of largest and most complex Dunedin Canmore has tackled to date. Work began on the site, where Dunedin Canmore has 24 homes, in September 2015 to halt crumbling stonework. Since then the extensive work on the outside of the building has included repairing the original stonework and roof slates.

The regeneration project is part of Dunedin Canmore’s commitment to sustaining the future of its older pre-1919 homes by delivering a £10 million investment programme over the next decade. The project won a commendation at the CIH Awards in November 2016. It is due for completion in Spring 2017. 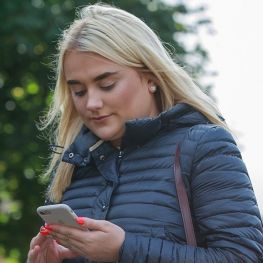